Your comments on the Juliana Redding case are welcome here. 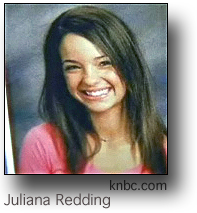 Alexander Merman, who was found dead in his Santa Monica condo last week, died of multiple stab wounds, according to the Los Angeles County Coroners Office. -The LookOut News

The findings of the autopsy conducted Saturday dispelled a report in the Los Angeles Times that Merman had been shot to death. Police had reported that Merman died as a result of “blunt force trauma.” -The LookOut News

Both Merman and Juliana Redding, who took several courses at Santa Monica College, were living alone and discovered after their mothers had asked for someone to check in on the victims, concerned after having difficulty reaching their children. -Santa Monica Daily Press

Alexander Merman, 35 — who was apparently beaten to death — was found dead in his apartment at 520 Montana Ave. at about 8:05 p.m. Wednesday, said Santa Monica police Lt. Alex Padilla. -KNBC

“The mother had not been able to get in contact with her son for several days,” Padilla said. It was unknown how long Merman had been dead, he said. -KNBC

Police say the two murders in Santa Monica are unrelated, but both draw eerie similarities. Both murdered in their multi-family complexes, 3-miles apart, Juliana Redding, found dead on Sunday, and Alexander Merman, found on Wednesday, were discovered in their states at the request of each of their mothers for someone to check on them since communications had lessoned. -LAist.com

An artist’s body is found in his Montana Avenue apartment. Police say there is no apparent connection between his death and the killing of a woman whose body was found Sunday about 3 miles away. -Los Angeles Times

Last fall a woman was assaulted in her Princeton Street home by a 17-year-old man from Oxnard who was believed to have been working on her house during the day.

The two incidents were unrelated but occurred on women who were believed to be living alone at the time.

When it comes to safety… -Santa Monica Daily Press

(on the Juliana Redding case)
Assistant Chief Ed Winter of the coroner’s office said that Redding’s autopsy was completed, but Santa Monica police put a “security hold” on the results. Winter said it would probably be 30 to 60 days before the results would be made public. -KCBS

Police on Thursday investigated the “suspicious death” of a man whose body was found inside a Santa Monica apartment, the second apparent homicide in the normally tranquil city since the weekend. -KNBC

Kovacik said police had determined there was no connection between the man’s death and Redding’s murder. -KNBC

My sister Ginny Clements is on the line from Tucson, and she sounds distraught.

“A girl I knew who was the granddaughter of a close friend was murdered in Santa Monica,” she said. “Her name was Juliana Redding, and I just feel terrible about it.”-Long Beach Press-Telegram

“The preliminary investigation has revealed no bullet or stab wounds,” Winter told the paper, though he declined to elaborate on Redding’s injuries or disclose a cause or time of death.

KABC reported that the autopsy results won’t be released for 30 to 60 days.

Police said they were working with DNA taken from the scene.

“We have collected some evidence at the crime scene that we’re looking at, both DNA and other,” Padilla told KABC. “And so any of that information will certainly be evaluated.”-FOX News

With tears in their eyes, friends from the Venice wine bistro where she had worked part time for about a year brought flowers to her apartment building Tuesday, placing them by a nearby palm tree. -LA Times

In high school “she was involved in the drama department, as well as the Salpointe golf team and student council, she was a good student,” said Kay Sullivan, a spokeswoman for the school. -Tucson Citizen

“I was divinely placed in a position to see how the music made those living in poverty feel so good,” he (Cipes) says.

Anyone with information about this case is asked to call the Santa Monica Police Department at 310-458-8451.

A young woman who went to California to pursue her dream of becoming an actress and model was found dead inside her Santa Monica apartment early Sunday evening.

KABC-TV in Los Angeles reports that 21-year-old Juliana Maureen Redding was murdered and that police discovered the victim’s body after receiving a phone call from Redding’s concerned mother. 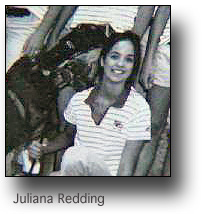 The news station reports the mother had made “several attempts” to contact her daughter.

According to KABC, police have said Redding was “assaulted.” KNBC reports that “there was some trauma to the body.”

No word yet on the cause of death.

(*KABC has several videos now on the Redding story. Video “New details in Santa Monica murder” shows police investigating what appears to be a trail of blood near Redding’s apartment. This video also includes a movie clip featuring Redding and an interview with her high school golf coach).

Redding had moved to California from Arizona. According to published reports, she graduated from Salpointe High School in Tucson.

*Update: Movie trailer and cast info for film featuring Juliana Redding. This appears to be the same person killed in Santa Monica.

There are some conflicting reports concerning the spelling of Redding’s first name. KGUN-TV (Tucson) appeared to spell it “Julianna.” However, this could not be verified as the station has not published the Redding story on its Web site.

As of early Tuesday morning, KOLD-TV (Tucson) used “Juliana” in its copy/text portion of its Web report. However, “Julianna” appears beside the victim’s picture at kold.com.

At this time, Beyond90Seconds.com has decided to use the Associated Press spelling of the victim’s name.

If Beyond90Seconds.com learns that a correction of the victim’s name is needed here, the correction will be made promptly.

Your comments on the Juliana Redding case are welcome here.

*special thanks to Tami over at Crime Interrupted who sent me some of the links concerning Greg Cipes.

15 thoughts on “Who killed Juliana Redding?”