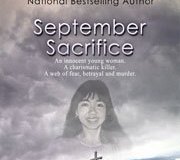 “If I’m ever late for work, call the police!” – that’s what Albuquerque, New Mexico bank teller Girly Chew, 36, told her boss. The Malaysian-born beauty lived in mortal fear of her pathologically deranged husband and had taken out a restraining order against him. She was late for work for the first – and last – time on September 10, 1999. Her bloodstained clothes were found near a lonely stretch of desert highway. Chew’s estranged spouse was an unrepentant scam artist with a terrifying violent streak. Born Armando Chavez, Jr. in Texas, he changed his name to Diazien Hossencofft and said he was from Switzerland. Claiming to be a surgeon and DNA expert with an anti-aging formula, he conned a woman dying of cancer out of nearly a half-million dollars. While married, he conducted numerous affairs – even managing to wangle sole custody of the infant son he fathered with one of his mistresses. Nursing a sick obsession with his wife while exerting Manson-like control over his girlfriend/accomplice, UFO fanatic Linda Henning, 47, Hossencofft set the stage for Girly Chew’s murder and followed through on his plan with sadistic enthusiasm.

“Horner tells this incredible story of the life and death of Girly Chew with the vivaciousness of a seasoned pro.” — Investigative Journalist M. William Phelps, author of Perfect Poison and Lethal Guardian.

“If there is a better story in the annals of true crime, I haven’t seen it yet.” — Gregg Olsen, New York Times Bestselling Author of If Loving You is Wrong

September Sacrifice is the culmination of a five year investigation conducted by this author. In researching the story, I interviewed many of the people associated with it. I also scrutinized thousands of pages of police and court documents, including transcripts. The prosecution, alone, had more than 400 people on its witness list at one time.

The Hossencofft case ultimately found its way to the national media. Dateline NBC, A&E’s American Justice, The History Channel’s Forensic Files and Court TV all produced stories about it.

Because of the complex layers within the Hossencofft case, no hour-long television program can come close to capturing the entire story. This is not an overstatement. Having worked closely with many of the producers of those national TV programs, I know they’d wholeheartedly agree. Not even Court TV’s estimated 40 hours of trial coverage could knit the story together in a uniform way.

It is my hope that the reader will discover that September Sacrifice provides the first comprehensive landscape of the Hossencofft case, doing so in compelling fashion while allowing the reader to connect the dots of a most tragic story.

Rest assured, the book contains a bounty of new information. And if you’re a fan of CSI or CSI Miami, then you’ll likely be interested to know that the Hossencofft case is considered the most in-depth forensic case in the New Mexcio’s history. The forensic evidence not only includes blood and saliva, but a vast array of materials, including; pink deer hair, art sand, and feathers.

The book also includes the suspects’s collective interest in UFOs and David Icke’s teachings about shape-shifting reptilians that he says rule much of the world.

Not forgotten in September Sacrifice is the life and death of the victim, Girly Chew, nor the tiny child who lived at the center of this frightening story.

Mark Horner is an award winning former investigative journalist whose career in television news began in 1987. He has reported live from the scene of several major stories, including the Northridge, California earthquake, the Heaven’s Gate mass suicides, the Elephant Butte (NM) Sex/Torture (David Parker Ray) case and the Cerro Grande (Los Alamos, NM) Fire. He also reported from Ground Zero, Shanksville (PA) and the Pentagon in the days that followed the September 11 terrorists’ attacks.

Horner has investigated the Hossencofft case since 1999 and began publishing a Web site dedicated to the story at that time. He’s appeared in several nationally televised programs featuring the Hossencofft case, including Dateline NBC, A&E’s American Justice, and Court TV’s Catherine Crier Live.

Horner’s hobbies include photographing the fabulous landscapes and wildlife.

The trial had taken place in October 2002. Two months later, Court TV aired about eight hours of the trial each day from Monday to Friday, December 9 through 13 (Court TV rebroadcast the trial nearly a year later, beginning October 27, 2003).

“This trial has had us spellbound.”
-Catherine Crier, Court TV anchor

“I tell you what, Nancy (Grace), you couldn’t have even made up a case like this: You’ve got sex. You got money. You got murder. You got UFOs. And you’ve got aliens!”
-John Q. Kelly, prosecutor who successfully convicted O.J. Simpson in civil trial

“I would love to have a case like this. This is the most exciting case I’ve ever seen!”
-William Montross, Jr., veteran New York City public defender

“This case is by far the most unusual that we have ever covered since I’ve been here at Court TV.”
-Lisa Bloom, Court TV anchor

“One of the most bizarre cases ever.”
-Nancy Grace, Court TV anchor

“It is, clearly, the most bizarre case I’ve seen in eight years at Court TV.”
-Rikki Klieman, Court TV anchor

“For those of you jaded people who think you’ve seen it all, take a deep breath and settle in because this is one of the most unusual cases we have ever covered here on Court TV.”
-Lisa Bloom, Court TV anchor

“I tell ya’, if you don’t love this case, then my sense of judgment is way off. This is a case that has it all.”
-Rikki Klieman, Court TV anchor

“It seems like a plot only Stephen King could conjure.”
-James Curtis, Court TV anchor

*All statements made during Court TV’s December 9-13, 2002 coverage of Linda Henning’s murder trial