If the number of visitors finding this blog after entering “Jamiel Shaw Jr.” into their favorite search engine is any indication, there is a sustained–if not growing–interest in the case of the well-liked teenager.

Having read some of your comments about a perceived lack of national news coverage on this story, the increase in traffic to this site should be encouraging as this story is reaching–and touching–people here and in new content emerging elsewhere on the Web.

I’m writing to let you know this blog hasn’t forgotten about Jamiel Shaw Jr. I continue to search for updates and will post any relevant new information here when I find it.

Although there doesn’t appear to have been any significant development since the arrest of 19-year-old Pedro Espinoza, I can pass along a bit of information that might be new to you.

First off, since its first mention of Espinoza’s arrest, the Los Angeles Police Department’s Web site has published an expanded account of this case.

Secondly, because I’ve yet to see a booking photo or “mug shot” of Espinoza in any media reports, I contacted a representative of the LAPD’s Media Relations Section today. I was told that LAPD doesn’t commonly release mug shots. Exceptions, I was told, include court orders and efforts to locate people no longer in custody.

Certainly it bears mentioning here that police are looking for a second suspect. Anyone with any information about this case can call:

As previously reported, Espinoza was released from jail just 28-hours prior to the murder of Jamiel Shaw Jr. According to a March 12, 2008 article about the arrest in the Los Angeles Times:

“While incarcerated, he (Espinoza) was sentenced Jan. 22 to 180 days in jail with credit for time served, records show.”

According to the LA Times, Espinoza had been in jail since November 18, 2007, serving time for exhibiting a firearm and resisting arrest.

On March 11, less than an hour after the story appeared on the Internet that Espinoza had been arrested for the murder of Jamiel Shaw Jr., I searched the Los Angeles Superior Court Web site’s data base for “Pedro Espinoza.”

Not surprisingly, the fairly common name yielded a lengthy list of cases. Because results from the court’s Web site don’t include dates of birth or other personal identifiers (outside of a case number), it was not possible to determine from these results alone which–if any–results were for the same Pedro Espinoza arrested in the Shaw case.

However, given the convictions related to Espinoza’s November arrest mentioned in the LA Times article and the mention of the January 22 sentencing date in that same article, I do have one result that appears to be for the same Pedro Espinoza. 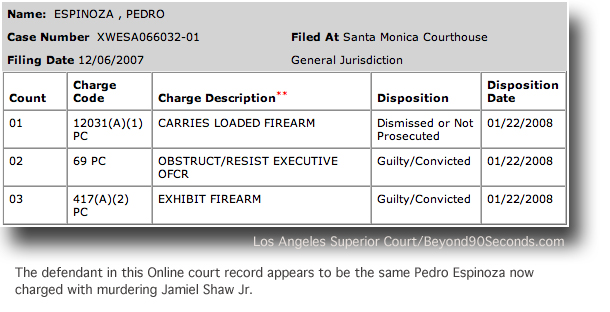 According to the LAPD’s Web site, Espinoza is now charged with: