Let me say it right from the start. This post will be “video driven.” Videos that are well worth considering if you want to learn more about the story unfolding in the rolling hills of pinon and juniper cradled within the northeastern corner New Mexico. Not far from the Colorado border to the north. And even closer to Texas, a few miles to the east.

It is this quiet space where Wayne Bent’s church says biblical prophesies have been realized, with more to come to affect us all.

They call the place Strong City. But there’s nothing that looks like a city for miles around. The reference to “Strong City” appears to be strictly biblical. You’ll find it mentioned in a bible verse a bit later in this post.

In addition to video, you will also find some additional research here, to include documents.

But let’s start with a documentary. THAT documentary. The one that first appeared on British television’s Channel 4. It might just be the catalyst behind the State of New Mexico’s decision to remove three teenagers from the Union County church property. 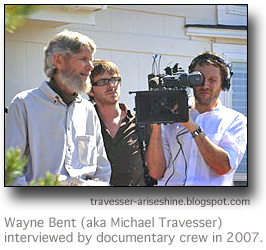 I suspect that investigators might even consider the documentary to be their “smoking gun.”

You can watch that video just below. But, hey, don’t click on it just yet. In fairness, I’m also presenting a video produced by The Lord Our Righteousness Church. In its video, the church claims the British film crew it welcomed onto its property last year produced a story that is both sensationalized and guilty of presenting statements grossly out of context.

Last year we opened up our homes and our hearts to a film crew from Firefly Film and Television Productions Ltd in London who spent several weeks with us interviewing and filming our lives here in Strong City. They stayed in a motel in the nearest town forty miles away, but each day they sat at our lunch tables as friends.

From the material they gathered while they were here they produced two documentaries, the first one titled, “End of the World Cult”, that was broadcast on Channel 4 in the UK on December 12, 2007. It was a sensationalized film filled with lies and distortions of the truth of what has actually occurred here in Strong City.

The second one, a remake which they titled “Inside A Cult”, was geared to capture the interest of the American viewing audience. It broadcast on the National Geographic Channel (NGC) in the United States on April 23, with an encore scheduled for May 7.

Note the dates. New Mexico State Police and representatives from the state’s Children Youth and Families Department first removed one child, a 16-year-old girl, April 22, 2008. Just one day before the documentary—according to Shecanaiah Travesser’s blog—aired on national television.

Authorities soon returned to remove a 13-year-old girl and a 16-year-old boy from the church grounds.

Such a story isn’t exactly good PR for any state largely standing on it tourism legs. And no governor likes to be embarrassed. Governor Bill Richardson–very much in the limelight these days–wouldn’t seem to relish the feared potential of what news headlines have already called the “doomsday cult.”

Okay, let’s cue up the videos. You’ll notice that they’re not brief. Here’s a look at the documentary End of the World Cult:

[googlevideo=http://video.google.com/videoplay?docid=-6509120662881681478&q=%22End+of+the+world+cult%22&ei=aeYaSMgUmqqqA87YgbsB] As mentioned above, members of church were far from pleased with the British doc. They say they’ve been betrayed, solidifying–it seems–a position now stated on the church’s Web site stating that the media are part and parcel of “the Beast.” On her myspace site, church member Danielle, 21, provides a “sequel” to the British film. Her offering is titled, The End of the World Cult II. On myspace, Danielle writes:

This little movie shows the contrast between the false picture that Ben presented the world with and the true picture of how things actually are here in our little group. Things are far different than Ben showed the world. 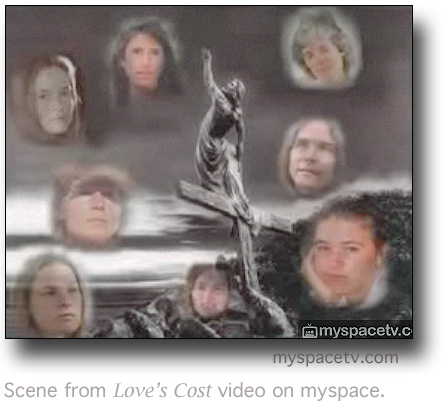 I made this little movie for my precious Messiah Husband. This movie came out of my heart feeling Michael’s heart of pure love and the great sacrifice that He has given for us.

On its Web site, the church at Strong City has also posted a 113-minute video detailing its position on the spiritual role of “Michael” (Wayne Bent) during the final days of the world as we know it. You can watch that video, titled, Experiencing the Finished Work by Strong City, here: [googlevideo=http://video.google.com/videoplay?docid=943913309286811947&q=%22Experiencing+the+Finished+Work%22&ei=eO0aSM_UA4ycqgP7xo23AQ]

By now, assuming you’ve watched the British doc and the other videos (or parts of them), you may have picked-up on a “Heaven’s Gate” vibe.

On its Web site just last week, the group itself posed the question, Is Strong City a suicide cult? It’s a question that’s actually the title of—you guessed it—yet another video:

While published reports say the legal name of the church’s leader is Wayne C. Bent, court records indicate that some in his flock have legally changed their names, taking on the surname “Travesser.” 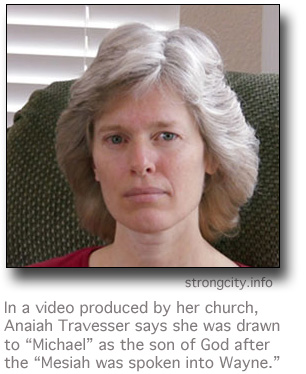 For example, in December 2004, a girl younger than 14, legally changed her name from Julia Irene Thompson to Willow Dawn Travesser. Court records in Union County indicate that her father, Jonathan Thompson, consented to the name change. The actual petitioner is the child’s mother, Anaiah Michal Travesser.

Divorce records also reveal the name “Travesser” in two separate cases. In each case, the wife petitioned for the divorce and had already assumed her new surname.

It’s not difficult to find information about how Bent and his followers found their way to New Mexico. The church’s Web site and its members’ blogs provide accounts of their collective migrations. The blog of Shecanaiah Travesser is

especially detailed; although I’ve not found a Bible matching her translation of Isaiah 26:1.

The journeys that, ultimately, landed The Lord Our Righteousness Church in New Mexico are often addressed on the church’s cyberspace writings.

In Part 1 of her blog, Shecanaiah Travesser writes about her earlier life in Spokane and Moses Lake, Washington. In Part 9, she writes that, in 1993, she and her church family had moved to an area called Castle Dome, located 50 miles north of Yuma, Arizona.

We would camp there in our temporary houses (RVs) on a parcel of land that Father had provided for us at the foot of Castle Dome.

There are 20 parts to the story Shecanaiah Travesser has titled, “Homeward Bound.” In Part 11, she writes about the church’s history in Sandpoint, Idaho and Safford, Arizona .

Indeed, a records check shows that a Wayne Curtis Bent, born May 18, 1941, lived on Wits End Road in Sandpoint, Idaho (Bonner County) when he received an Idaho driver’s license in 1999.

As I conclude this post this morning, what amounts to a gag order remains in effect. Wayne Bent is not providing comment. The case has yet to play out in court.

I am hoping that you have found the videos, links and documents useful as you seek to better understand this story.

No doubt, some will say they didn’t need ALL of this information to reach their conclusions…to form their opinions about what’s been going on within in those beautiful, rolling hills of Union County. Fair enough.

But the aim of Beyond90Seconds.com remains a simple one: To go deeper than what you’ll see on a typical local TV news story. And to attempt to do that absent of gossip, meanness and judgment.

Pretty simple really. Put as much useful info and links out as possible. And leave it for you to decide.

Thanks for stopping by. I hope some of you will post your thoughts here.

Oh, I did mention I’d come back to more videos, didn’t I? So let’s finish up with one more. It’s a look at the first teenager, named “Healed”, being removed from the church property April 22, 2008. The video is produced by Bent’s church and was posted on youtube: