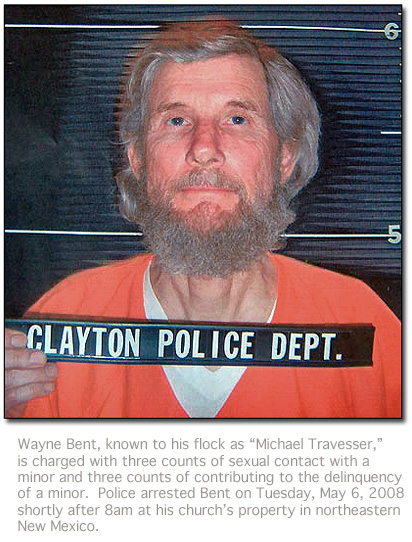 According to the affidavit for Travesser’s arrest warrant:

This morning at about 8:15 AM, officers from the State Police “Impact Team” served an arrest warrant on my Father, Wayne Bent aka Michael Travesser. He was arrested and taken to the State Police annex in Clayton for questioning. They then booked him into the Clayton city jail. I was told by the agent in charge of the case that the arrest warrant specified charges of three counts of sexual contact with a minor, and three counts of contributing to the delinquency of a minor. The bail was set at half a million dollars.

The State Police asked me to come to the courthouse in Clayton so they could question me. After my interview I, and a couple of other people went over to the State Police annex where Michael was being held. They were just escorting him out. He was in handcuffs, but looked serene and contented.

I expect we will be updating this site soon with a more complete response to these false charges, and the meaning behind these new events.

(*Although the Albuquerque Journal reports Bent is 67, a prior record of an Idaho drivers license once held by Bent states he was born May 18, 1941. If true, that would make Bent 66 at this time).

According to an e-mail I have received at 9:21 this morning from a member of The Lord Our Righteousness Church, Wayne Bent (aka Michael Travesser) is now in State custody.

The information comes at the end of the following e-mail received this morning:

I am writing, first of all, to tell you that I appreciate the fairness of your approach to the news about our little community here at Strong City. Yours was a “fair and balanced” that has never been remotely entertained by Fox News, and likely any other mainstream media outlet.

Even with the contact and knowledge I have of the media, I was nevertheless appalled at the blatancy of the outright lies, distortions and misrepresentations propagated by the British filmmakers. If the names, faces and voices were disguised, and there remained only the producer’s description of the events transpiring here (even though I have been a first-hand participant in this community since its inception, and known Michael for nearly thirty years), I would not have recognized the film as having been about us — so thoroughly fabricated was it. The National Geographic’s cut of the documentary was much fairer, however, but even there, as would be expected, they presented their own viewpoint of matters, which naturally carried with it the distortion that comes from those not personally involved.

Also my purpose for writing is to inform you that the police came to our land this morning, shortly after eight o’clock, and arrested Michael. It will be interesting to learn what the charges against him are, since I very well know that no laws have been broken here. I thought, in light of your fair treatment of our case, you should be one of the first to know this, rather than the serpentine organization of the media.