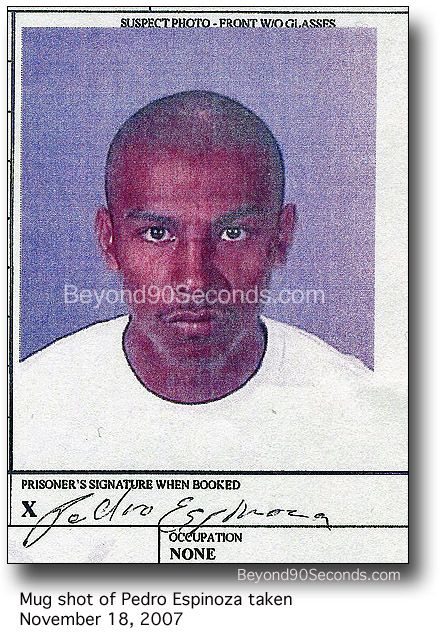 Beyond90Seconds.com has obtained a mug shot and a jail booking sheet for a man named Pedro Espinoza who was arrested by the Culver City Police Department November 18, 2007.

Beyond90Seconds.com formally submitted a written request for this information with the city of Culver City on March 17. This request was made because Beyond90Seconds.com had learned from a source within law enforcement that the suspect in the Jamiel Shaw Jr. case had been previously arrested in Culver City. The Los Angeles Times had also reported that Shaw’s accused killer had served time for a November 18, 2007 arrest in which he was charged with exhibiting a firearm and resisting arrest.

According to a Los Angeles County Booking and Property Record obtained by Beyond90Seconds.com, Pedro Espinoza was initially charged with assault with a firearm when booked on November 18, 2007 at 3pm. His bail was set at $50,000.

According to the November booking sheet, Espinoza stands five-feet-5-inches tall and weighs 130-pounds. The booking sheet also states that Espinoza “declined” to provide the name of a person to contact in the event of an emergency.

At the time of his November arrest in Culver City, Espinoza was 18. However, his date of birth is redacted on the copy of the booking sheet provided to Beyond90Seconds.com.

Please continue to follow this blog for the latest information on the Jamiel Shaw, Jr. murder case.