Update #5: 1:30pm (PST): This is another video produced by Strong City today. It features additional footage of O’Keefe/Esther as she’s taken to an ambulance. This video shows a closer shot of the court document deputies presented to O’Keefe/Esther.

Update #4: 12:45pm (PST): O’Keefe’s/Esther’s “heart-to-heart” comments to KOB-TV investigative reporter Jeremy Jojola. Last night—in an audio interview with Beyond90Seconds.com—Jojola spoke about this moment. The video is shot by members of Strong City. Jojola was wrapping-up his interview with O’Keefe/Esther for his TV station. 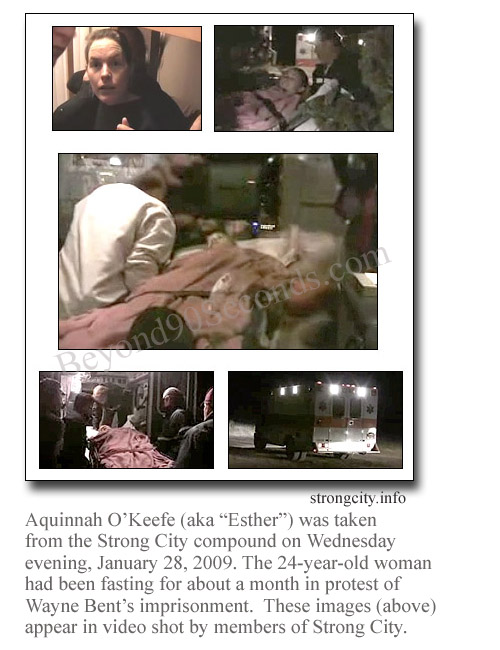 On Wednesday evening, law enforcement executed a court order and removed 24-year-old Aquinnah O’Keefe (aka “Esther”) from a compound in the remote area of northeastern New Mexico known as “Strong City”.

The video featured on this post was shot by members of Strong City/the Lord Our Righteousness Church. It’s just gone up on youtube, but has yet to be published on strongcity.info.

O’Keefe/Esther had reportedly been fasting—taking only water and a little salt—since the December 30, 2008 prison sentencing of Strong City’s leader, Wayne Bent. Last month, a Taos jury convicted Bent on one count of second-degree criminal sexual contact of a minor and two counts of contributing to the delinquency of a minor.

O’Keefe/Esther had recently proclaimed on strongcity.info that she was fasting to protest Bent’s imprisonment, and would continue to do so until his release—or her death.