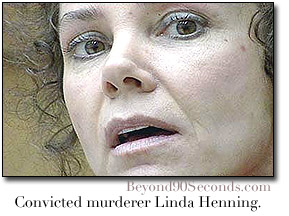 Henning is serving time for the 1999 murder and kidnapping of Girly Chew Hossencofft. Hossencofft’s estranged husband was also convicted in the case. Some of you may know that I wrote a book about this case. The title is September Sacrifice (Kensington Publishing Corp., December 2004). I was one of several people interviewed for the upcoming Snapped episode concerning Henning. The Hossencofft / Henning case will also be featured in a repeat of the truTV (formerly Court TV) program, The Investigators. The episode is titled “Alien Conspiracy.” I was also interviewed for this program.

Excerpts can be seen here. This was the first episode of The Investigators and the producers really did an outstanding job of explaining a complex story. The final result was quite compelling. However, if you want to catch the repeat of “Alien Conspiracy,” you’ll probably want to set your DVR as it’s on at 4am Tuesday (April 8th) in much of the country. You can check the truTV program schedule for this episode here.

And if you’re wondering about how on earth “aliens” work their way into this story, you might enjoy this courtroom exchange between Henning and yours truly:

Anyone wanting to learn even more about this case can do so at markhorner.com/Hoss.