CONTINUING COVERAGE OF THE MUDSLIDE NEAR OSO, WA

Update:  About 7 hours after this post was published, the Associated Press published an insightful story online regarding the dramatic changes in the numbers of people reported missing in the mudslide near Oso. A link to that story is provided here for additional reading: 18, 108, 176? How many missing from landslide? / Associated Press, March 25, 11am PST

Yes, the unimaginable scope of the mudslide near Oso continued to sink-in on Monday.

And as it did so, Washington Governor Jay Inslee returned to survey the area and meet with locals.

Shortly after 4:30pm, Inslee arrived at the SR 530 roadblock located about three miles west of the mudslide.

Inslee walked directly towards Washington State Patrol Troopers positioned at the roadblock, then shook their hands.

He gestured a “thumbs up.”

And he paused to place a pin on one young Trooper’s uniform.

Beyond90Seconds.com approached the governor and asked if  he would answer a quick question.

He obliged (then answered more than one).

The governor was first asked for his impressions on what he was seeing on Monday.

“Well, we’ve got a full-blown search and rescue effort that’s ongoing right now,” Inslee began.  “We’re getting some additional federal assets in, an incident management team. A National Guard search and extraction team will be coming in. So, we’re bringing in some additional troops to replace some of the exhausted people here. And it’s a full-blown rescue effort.  The families of Washington deserve that. Our hearts are with them. We want to get all the resources we can.  And we are.”

Monday had begun with news that the official number of missing people had climbed from 18 to 108 (later that evening, the number of people reported missing increased to 176).

Monday afternoon, Beyond90Seconds.com asked Inslee, “Why the delay? How do we go from 18 to 108?”

“People in the search and rescue effort really need to answer those questions.  I think that they wanted to be conservative to try to match all of the information coming in from so many ways, but we really want to focus on the rescue right now,” Inslee said.

The interview with the governor was streamed live using an iPhone. The video appears below (please see video Live Stream #10: Oso mudslide. The interview begins at 1:54. Also, the moment Inslee placed a pin on the Trooper can be viewed at 1:38).

In the final live report (please see Live Stream #11: Oso mudslide), Beyond90Seconds.com reported that cadaver dogs are being utilized at the mudslide. That information did not come from official channels.

At a news conference early Monday evening in Arlington, Beyond90Seconds.com asked for confirmation that cadaver dogs were at the mudslide.

Monday’s live reports from the roadblock also addressed the increasing media presence (to include mentions of international coverage), activities observed in that area, and the weather.

The pictures in this story include images of KING-TV’s (NBC) weatherman Jeff Renner standing-by moments before his live report regarding a forecast for significant rainfall in the days ahead.

The photos of the helicopters passing overhead were taken at the roadblock.

And the images of the outdoor news conference were taken early Monday evening in Arlington. 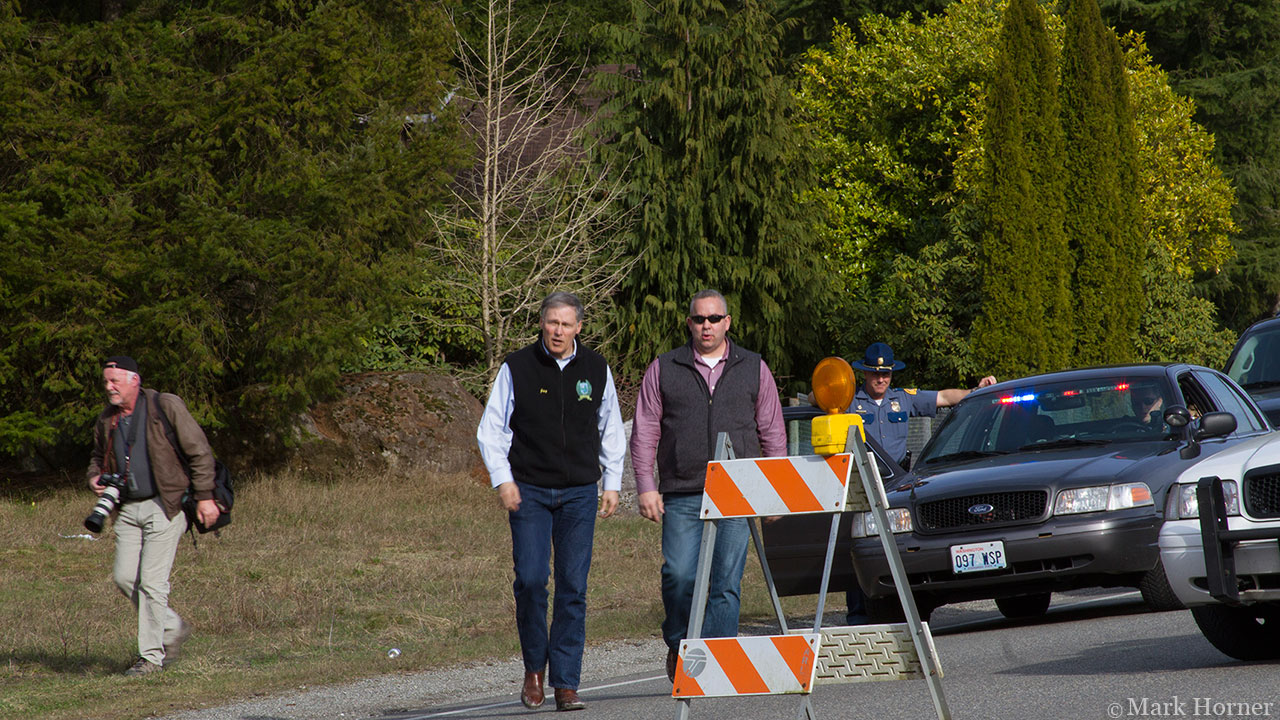 1 thought on “One on one with the Governor”