It’s a murder case that broke many hearts, strained race relations and fueled intense debate over illegal immigration. Some had hoped that “something good” could emerge from the March 2, 2008 shooting death of a 17-year-old boy named Jamiel Shaw II. 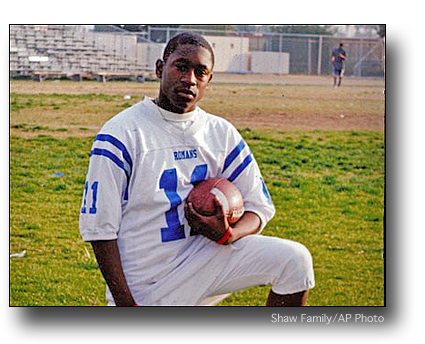 Shaw (archives) was a high school football star (Rise Magazine named Shaw’s murder one of the top high school sports stories of 2007-2008). His dad had an “18 year plan” for the boy. His mother was away serving her country in Iraq.

Then, as Shaw walked home while speaking with his girlfriend on a cell phone, an alleged gang member got out of a car, walked-up to him, and shot him to death.

And that he’d been released from jail just 28-hours prior to Shaw’s murder.

The “something good” that could come out of Shaw’s death, some argued, could be “Jamiel’s Law”. If passed by the voters of Los Angeles, Jamiel’s Law would allow the LAPD to arrest illegal immigrant gang members for entering the country unlawfully. Presently, the LAPD’s Special Order 40 states that “officers shall not initiate police action with the objective of discovering the alien status of a person.”

Two of the most outspoken proponents of Jamiel’s Law have been his parents.

When rumblings emerged on the Internet that the victim had belonged to a gang, Jamiel Shaw I spoke-out forcefully in defense of his slain son.

More than 9 months have now passed since Jamiel Shaw II’s murder. And with two weeks remaining before their first Christmas without their son, official word came Thursday that the petition to get Jamiel’s Law on the May 2009 ballot had come up short.

According to an article that appeared on the Los Angeles Times Web site Thursday evening:

Supporters estimated they had turned in more than 76,000 petition signatures before Friday’s deadline, but elections officials said they tallied only 18,559 — far short of the 73,963 signatures required. (LA Times)

Shaw’s family hasn’t given up hope that Jamiel’s Law will pass one day.

“We’re not going to stop,” said Althea Shaw, 47, Jamiel’s aunt and a major organizer for the ballot measure. “We can’t bring my nephew back, so we’re going to keep fighting. We have to.” (LA Times)