KOB-TV Investigative Reporter Jeremy Jojola continues to make contributions here as a special correspondent to Beyond90Seconds.com. Jojola’s e-mails, text, pics and even some of his Twitter updates will appear below. I’ll also include the time (MST) the information was sent to this blog.

Gabriel Travesser, current church member, on the stand for Defense 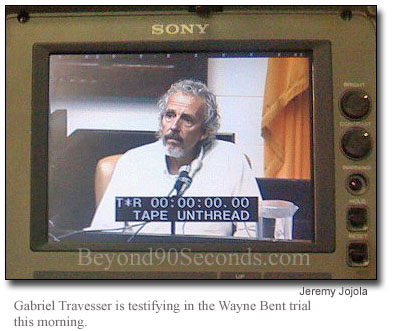 Gabriel Travesser: people have “twisted” the view of his church / 13 minutes ago

10:44am (MST)
(Jeremy Jojola has just filed a phone report with Beyond90Seconds.com.  He reports that court is currently in a 15-minutes recess.  Gabriel Travesser has finished testifying.  Jeremy Jojola sees former LOR member Prudence Welch just outside the courthouse.  Jeremy’s phone report will appear here shortly as an audio/mp3 file.)

11:06am (MST)
(AUDIO:  Jeremy Jojola’s phone report to Beyond90Seconds.com appears below.  Jeremy filed the report at 10:38am MST today.)

Allasso Travesser on stand, current church member, says he kissed Wayne Bent on lips during religious experience.  Sounds like defense is trying to establish that Bent kisses everyone

12:19pm (MST)
(Court is now in recess for lunch.  Just spoke with Jeremy Jojola.  Some interesting “behind the scenes” insights shared by Jojola.  I’ll post the audio here shortly.)

1:20pm (MST)
(Last night, I asked Jeremy Jojola asked if he could send me a picture of the KOB-TV satellite truck at the Wayne Bent trial.  He took the photo below today.  Suddenly, “timely”.)

Judge to prosecutor Tomas Benavidez: I’m getting frustrated. Get to the point (during Bent cross examination) / 3 minutes ago

Bent admits to “permitting” girls to get naked in his bed. / 20 seconds ago

Bent says he’s required under his religious beliefs to allow girls to get naked. He claims he can’t disobey their requests / less than 20 seconds ago

Bent’s testimony ends. Religious expert Stephen O’Leary on stand for defense / half a minute ago

3:13pm (MST)
(VIDEO:  Backing up a little more than two hours for moment, here’s a look at Jeremy Jojola’s report for KOB-TV at noon today. It may take a moment for the video to appear here.)

8:03pm (MST)
(Jeremy Jojola’s 5pm MST live report for KOB-TV can be seen below.  The report features Wayne Bent on the witness stand and a defense expert witness.)