Expect to see a large number of wondrous Periscope broadcasts from New Mexico over the next nine days.

The 44th annual Albuquerque International Balloon Fiesta  gets underway at 6 A.M. Saturday with the Dawn Patrol.

In this new era of Periscope, I’ve been  thinking about all of the live streaming video that’s about to feature the magical skies and vibrant colors viewed from the balloon field, the city, and straight from the gondola.

When I worked as a reporter in Albuquerque (1995-2005), the #BalloonFiesta was touted as “the most-photographed event in the world.”

In the 90’s, KRQE-TV lugged around a clunky (by today’s standards), portable contraption affectionately called “the mule”.

The mule was a microwave broadcast unit that had to be pointed at a far-away tower atop the Sandia Mountains in order to achieve a live broadcast from the roving camera on the balloon field.

Now we can do all of that with technology held in the palm of our hand.

This year marks the first balloon fiesta since the Periscope launched earlier this year.

And it would seem that the hugely popular live streaming app could have a profound impact on the event.

At the very least, Periscope will introduce many around the globe to Albuquerque’s annual big-splash aimed at the early autumn skies.

People will will be watching the Periscope broadcasts on smartphones, tablets, and desktops.

Many people will get their first good look at a New Mexico sunrise, the winding Rio Grande, and the copper-colored leaves adorning cottonwoods along the river.

People will see and learn how mother nature’s “Albuquerque Box” is the engine fueling balloon voyages that go for miles, then land almost precisely where they began.

In addition to introductions and postcard-worthy views, Periscope will have at least one other impact, too.

The demand for bandwidth is likely to be greater than ever at this year’s balloon fiesta.

But that’s not all due to the arrival of Periscope, of course.

There will be more smartphones using more apps than ever before.

All of this contemplating about Periscope’s potential impact on the fast-arriving balloon fiesta is what, ultimately, compelled me to reach-out to the Balloon Fiesta’s spokesperson, Tom Garrity.

I well-remember Tom from my years spent in New Mexico.

It was gracious of him to agree to today’s interview featured in the video below.

We spoke via Skype, while streaming our conversation on…you guessed it…Periscope. 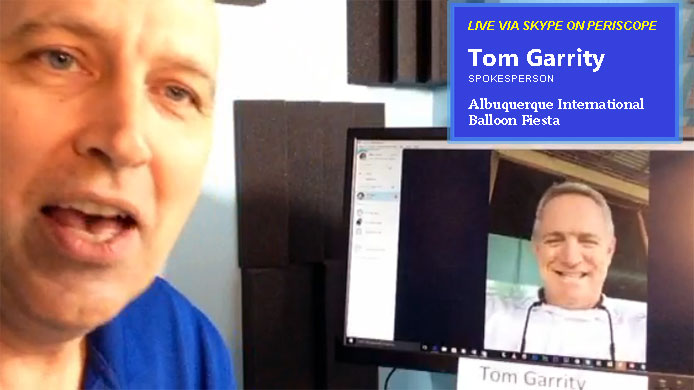