(Edmonds, WA) On a late September day, I drove to Picnic Point Park in Edmonds to Periscope (broadcast) what was shaping-up to be a promising sunset from the beach.

I arrived just minutes prior to the sun’s sinking behind the Olympic Mountains.

No clouds in the sky.

The distant peaks across Puget Sound seemed destined for tack sharp images in my Canon 7D, and for a visually pleasing Periscope broadcast, as well.

After walking over a narrow plank stretched two-or-three inches above the rising tide, I found a tiny spit of beach where upon I hurriedly set-up my tripod.

Next, I opened the Periscope app on my iPhone, entered a title for my broadcast, then secured that phone in the hot shoe directly atop my Canon.

But immediately prior to pressing Periscope’s red Start Broadcast button, I clicked-off three quick shots of the setting sun, now right atop the Olympics.

Once the broadcast began, my attention turned to my iPhone screen, where I welcomed viewers and responded to comments.

When I returned home later that night, I imported my photos in Adobe Lightroom on my PC.

And that’s when something caught my eye. 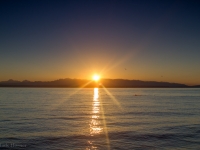 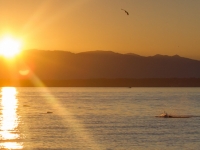 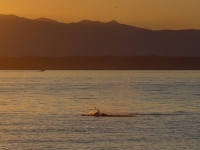 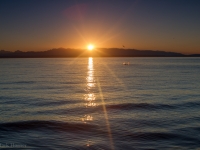 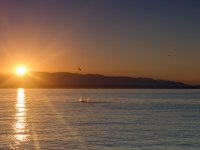 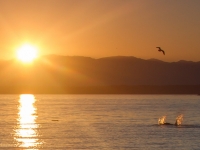 Something was making a bit of a splash out in the water.

A look at the next photo revealed a bit more.

And a bigger splash.

Still, I wasn’t sure what creature had been out there, totally unbeknownst to me, during my time at the beach.

The mystery compelled me to re-visit my Periscope broadcast for a closer look.

In doing so, I believe I’ve been able to successfully identify the animal.

And while examining the video and photos, a sort of self-examination unfolded, extending the narrative of this story.

See it all unfold in the video below.

Prior to finishing the editing on this video, I shared the events of that September day at the beach with my friend, Christian Sasse.

He reminded me that he often makes discoveries in his images that he did not see while taking them.

In an email, Christian also wrote the following:

That reminds me….Whilst driving to Penticton, I was listening to a radio station talking about mindfulness. It really struck and shook me. Most of the time we are mindless which means we do not make a conscious effort to observe new things because we are rushing around. So when I walk to work now I try and notice 5 new things I have not seen before. I was surprised what impact it made on me.  Same with people. Find something new in a person you know every day.”

Christian shared a link to that radio program, hosted on the website onbeing.org.

That broadcast features an interview with social psychologist Ellen Langer.

Langer defines mindfulness as, “The simple act of actively noticing things, with the result of increased health, competence, and happiness.”

That audio interview now appears on this page, below the video.