61-year-old Ross Renecker’s violent criminal history dates back to his boyhood days. But it was a 1977 murder that put him behind bars for three decades. His victim was a single mother of three whom Renecker abducted from the parking lot of a Seattle-area pancake house. 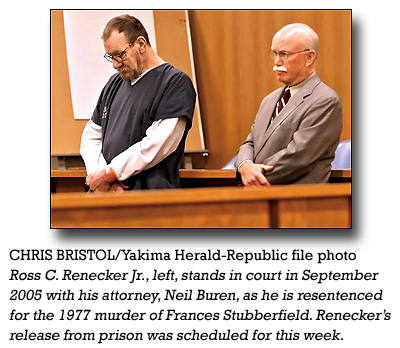 Chilling details of this case emerge in my interview with the victim’s son, Scott Stubberfield. As the interview unfolds, you’ll learn about the controversial Washington State Supreme Court ruling that resulted in the killer’s release from prison and has invalidated hundreds of murder convictions.

Now the convicted murderer, 61-year-old Ross Renecker, says he’s headed to Arizona to live out the final days of his life.

Hear why the victim’s son says anyone living near Renecker must be careful.

And here’s the kicker: Apparently, Renecker’s new, unsuspecting neighbors won’t be warned about his history.

The story unfolds in this week’s podcast.