Delich told detectives his MySpace screen name was “Bogoljub.” His last log-in was the day of the shooting, and the pictures of him in camouflage with guns appeared to have been taken that day as well. -Arizona Daily Star

Update (June 5, 2:41pm): What are those weapons featured on Delich’s myspace page?

Update (June 5, 9:41am): Delich’s “other” myspace site (user name “zeljko”). Videos on Muslim topics will no longer play. Link to Serbian site. More plants…
(*special thanks to Beyond90Seconds.com reader “Bonnie” for this tip) 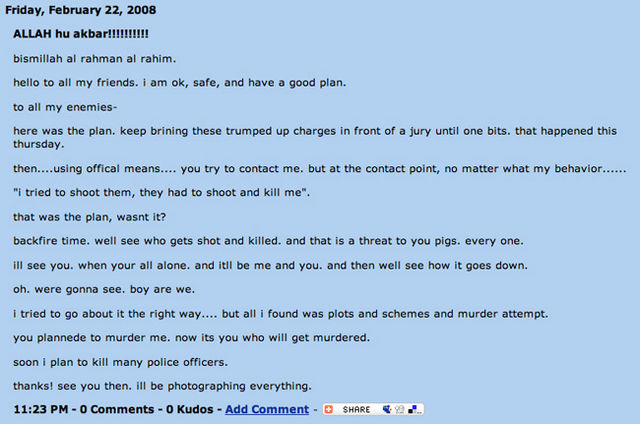 (please note: a link to VIDEO appears at the end of this post)

(Tucson, Arizona) David Nickolas Delich had apparently not logged into his myspace account since Sunday, June 1, 2008; the same day investigators say he shot three law enforcement officers, fatally wounding one of them.

But it appeared someone logged-in to the account shortly after 3:30 this morning. It’s a moment I recorded on video.

The video also includes two photos of Delich with weapons. A third picture appears to be aimed at showcasing his effort to display his arsenal.

A caption beneath one of these photos states, I love you bella donna.

Or, perhaps, a highly toxic and mind-altering plant?

Delich’s myspace site features many pictures of a green plant.

Before watching the video, I hope you’ll read the brief article above it.