Sentencing in the state of New Mexico’s criminal case against Wayne Bent is about to get underway at this minute. The sentencing phase was set to begin at 8:30 (MST) this morning in Las Vegas, New Mexico.

Earlier this month, a jury convicted the embattled minister of the Lord Our Righteousness Church on one count of second-degree criminal sexual contact of a minor and two counts of contributing to the delinquency of a minor.

Beyond90Seconds.com has learned that former LOR member Prudence Welch is attending this morning’s sentencing and that Welch might be providing a statement during this sentencing phase of Bent’s trial.

Also, be sure to check back here at this post for updates from KOB-TV investigative reporter Jeremy Jojola. Jojola is also scheduled to provide a video webcast report to Beyond90Seconds.com shortly following the completion of today’s sentencing.

Court about to begin. Bent, followers in court / 1 minute ago 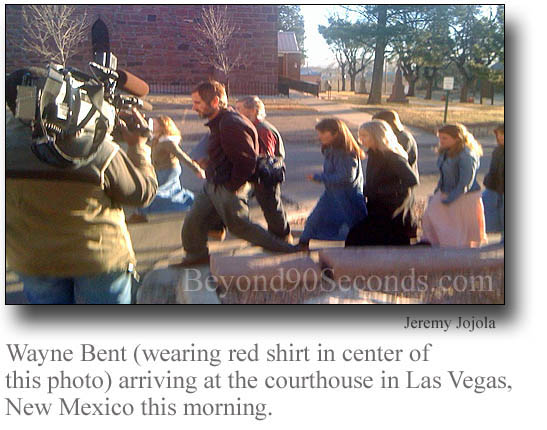 9:05am (MST)
(Read Jeremy Jojola’s Twitter updates from inside the courtroom. He’s posting photos, too.)

9:43am (MST)
(Just a quick note here to let you know that Beyond90Seconds.com is planning to do a *video* interview with Jeremy Jojola–via Skype–following this morning’s sentencing. The plan is to post that interview on this blog later this morning.) 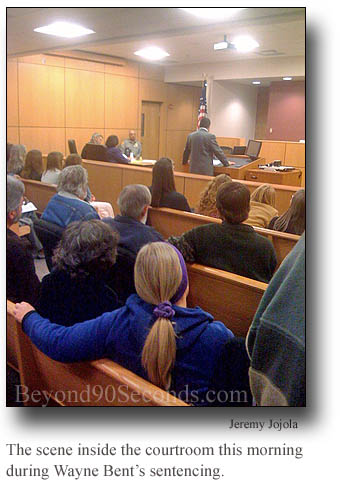 Bent’s followers speak, praise Bent. / less than a minute ago

Judge limited hearing to 10:30. Expect sentence after that in about ten or 15 minutes. / less than 20 seconds ago

Bent speaks: “No crime committed at Strong City”. Hearing going over time limit. / half a minute ago

11:22am (MST)
(I suspect many of you have already noticed, but I did post the news of Bent’s sentence in a “Breaking News” post immediately after Jeremy Jojola reported the sentence on Twitter.)

11:42am (MST)
(At this minute, Jeremy Jojola is preparing his story for KOB-TV’s noon newscast. Be sure to look for it at KOB.com. After completing his live report, I expect to hear from Jeremy. We’ve planned to do a video interview w/Q&A, via Skype. Some of you may recall I interviewed former LOR member Prudence Welch in this same fashion earlier this year. I hope to have today’s interview with Jeremy Jojola posted early this afternoon).

12:47pm (MST)
(Just spoke with Jeremy on the telephone briefly. He shares that things are taking longer than expected. He’s now waiting for the “perp walk”, that moment when the criminal is taken away in cuffs. Jeremy says he hopes to be on the road to Santa Fe soon and that we can attempt to do our video interview at that time. Of course, he won’t be driving. Jeremy and I each have Skype on our laptops. He also has a wireless card. So, as long as he’s got a signal, we should be able to do a video interview.)

3:10pm (MST)
(VIDEO: Beyond90Seconds.com interview with Jeremy Jojola concerning Wayne Bent sentencing will appear here shortly. While there’s video here, the signal was too poor to include video of Jeremy. So, he spoke by telephone.)