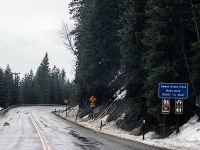 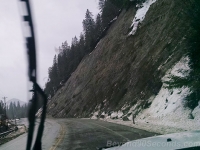 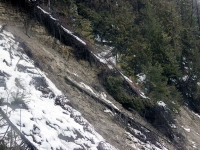 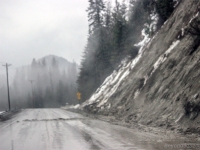 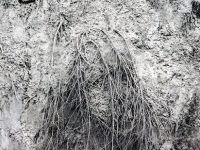 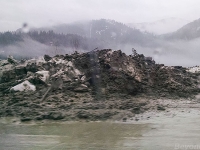 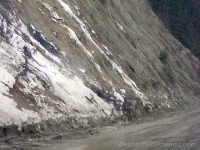 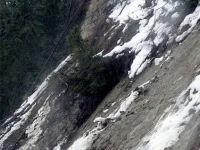 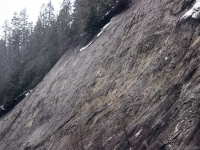 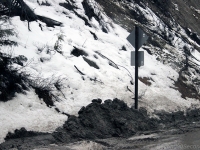 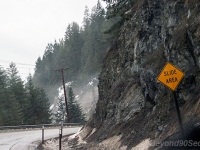 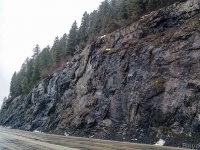 (Metaline, WA) Warmer temperatures, rain and fast-melting snow have resulted in a flood watch and mudslides in Northeastern Washington.

The woman says the stretch of road looked markedly different than it had only one day earlier.

She says the ground seemed to get even”softer” and “spongier” during the course of that morning.

“(The snow melt and rain) really loosens it up. It’s a really thin-looking clay.

“A lot more water coming down. I mean, a lot of water. There wasn’t really water even coming down before (earlier in the week). And (Friday) there was logs coming down, there were some trees; some stuff they’d (workers) had actually already pushed across the roadway.”

By mid-Friday afternoon, a mudslide blocked the southbound lanes of Highway 31, and part of the northbound lanes, too (KREM-TV published a short story on it’s website at 3:19 P.M.)

A mudslide in February is unlikely to surprise many here.

That stretch of Highway 31 is a known spot for them, and includes yellow caution sign that warn, “Slide Area”.

But in this “post-Oso” world, the site of newly-fallen trees, and even small clods of earth and rock tumbling toward the road, give many pause.

The parent who took these photos thinks about the school buses that pass along this road.

She thinks about the many wonderful people who live in her small, close-knit community.

And she wants some peace-of-mind; reassurance that a devastating mudslide won’t happen here.