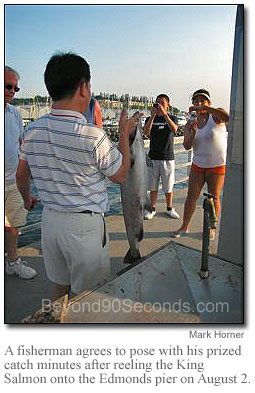 (Edmonds, Washington)  Okay, perhaps I should have been in “reporter” mode, but on the early evening of Sunday, August 2, I was on a simple family stroll along the beach in Edmonds, Washington.  As we approached a popular pier, a sudden cheer cracked the air.  I immediately set my sights upon the furthest reach of the pier, just in time to see the silhouette of a sizable fish dangling against the rich, blue sky.

A throng of people, large and small, immediately closed-in on the lowering fish as if drawn by an equally shared pull of some magnetic force.

It didn’t take long for me to quicken my gate towards the excitement, pulling camera out of case along the way.

Although I grew-up in this area and spent many a summer day on a dock like this one, I found myself acting like a tourist.  Taking LOTS  of pictures of the hefty fish.

Such is the excitement when someone lands a King Salmon.  Especially from a pier.

As a teenager and younger man, I’d heard tales of people catching Kings on the Edmond’s pier.  Now, at age 45, I was seeing it happen the instant I’d returned after many years away. 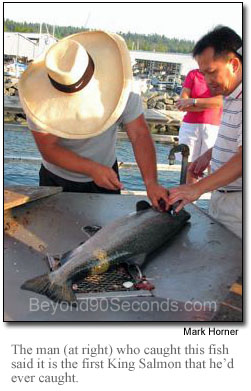 The man who caught the fish quietly honored requests to pose with his King as strangers clicked-away on their cameras and cell phones.  He’d never caught a King Salmon, he shared.

No one produced a scale, but estimates of the salmon’s weight ranged from 16 to 20 pounds.

An apparent stranger eerily entertained the all-ages crowd as he gutted and cleaned the King.

“It’s customary that when a person catches his first King, he cuts the heart in two and eats both pieces,” the man said as he busily went about the task very much at hand.

“Ewwww….Ooooh,” came the collective response from some nearby young girls, then adults, too.

“I heard it was the person cleaning the fish who was supposed to eat the heart,” another man quipped after the ewwwws and oooohs subsided.

I decided to keep my “tourist” hat on, but never asked for a pose.  The man who caught the fish seemed eager to move toward the peace and quiet he’d known only minutes earlier. 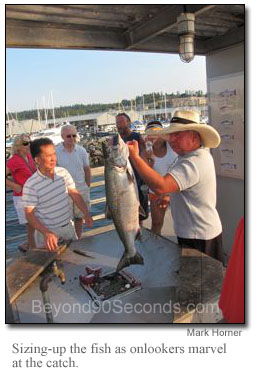 I decided not to further pierce the moment by asking for his name or that of the man who cleaned the salmon.  Let the moment ebb, much like the waves I’d watched upon the sand near my feet earlier that evening.

I will report, though, that no one ate the fish’s heart. I knew some would wonder.

And now, because the fun of that evening has stayed fresh in my mind an evening later, I’ve decided to blog about it here. 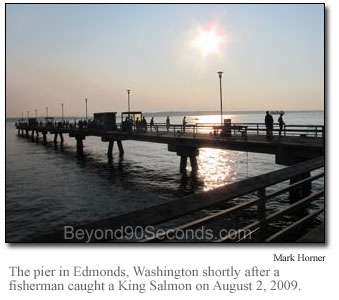