(July 25) In a phone interview with Beyond90Seconds.com Friday afternoon, Constable David Higgs of the Royal Canadian Mounted Police confirmed that the body found inside a barrel pulled from the Lee River Wednesday was that of 22-year-old Chad Randall Davis.

Davis as reported missing in Winnipeg on February 10, 2008.

Special thanks to Beyond90Seconds.com reader “Leo” for leaving a comment that the body had been identified as Chad Davis. That prompted a quick Google search which turned up nothing.  However, I called the home of George Knight (one of the men who found the body).  A person answering the phone at Knight’s home explained that Channel 5 in Winnipeg had reported the identity of the body. 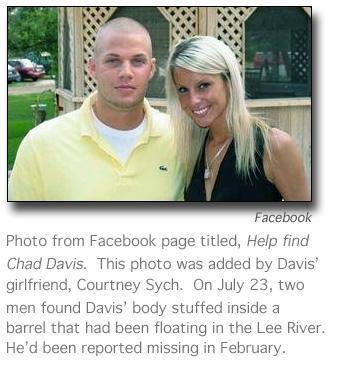 “This is the most disgusting thing I’ve ever heard of in the world. I can’t get it out of my mind,” his weeping girlfriend Courtney Sych told the Free Press in a telephone interview from her Calgary residence. (Winnipeg Free Press)

His family told police he has never gone missing like this before and they are very worried about his safety.
Davis appears to have a troubled past: police say he is “known” to them, and court records show Davis has a number of outstanding charges for failing to comply with court orders and a drug related offense. He also has a prior conviction for assault. –Global Winnipeg