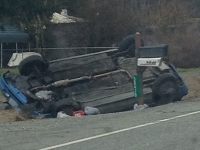 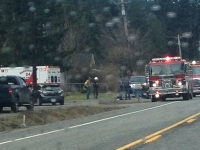 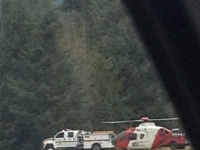 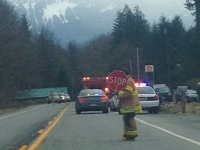 (Arlington, WA)  A 2 year-old girl was airlifted to Harborview Medical Center after a single vehicle, rollover crash on SR 530 late this morning.

Trooper Mark Francis of the Washington State Patrol says the child’s injuries are not life threatening.

The Herald (Everett) reports that a 27 year-old Marysville man was driving the Honda Civic, and that he was treated for injuries at Cascade Valley Hospital, then released.

The highway was temporarily closed around noon when the Airlift helicopter landed to receive the patient.

The crash happened near milepost 43 and Swede Heaven Rd, an area on the outskirts of Arlington.

The location is about six miles west of Darrington.

Jaimie Mason lives on Swede Heaven Road and provided the photos that appear in this story.