When I recently returned to my home state, I vowed I’d get to know Washington better than ever; that I’d attack it with the same curiosity and sense of exploration that I’d applied to southeastern Arizona, Door County Wisconsin and much of New Mexico.

It’s easy to take a lot of things for granted in life, isn’t it?  Time spent with our parents, for example.

Treasures only a short drive from our front door can be under appreciated, too.

The first time I moved to Tucson, in 1991, I’d been surprised to meet a few natives who’d never been to Sabino Canyon, let alone the Grander fissure to the north.

So, here I am.  Now living only a few miles from the neighborhoods that helped shape me. Familiar, yet unfamiliar, as much has changed here since I left for college, and then (after a brief stint managing a Skipper’s fish-and chips restaurant) onto a TV reporting job in 1987.

The video featured in this post is not the typical fare for this blog.  No crime, no cults, no floating feet.

Instead, today’s video features pretty pictures of bald eagles, snow-capped mountains, river banks, a blue heron, a logging truck and photographers delighting in all of it.

It’s been more than 20-years since my only prior visit to Rockport to see the eagles that winter along the Skagit River. Back in the late 80’s, I’d made the trip with a friend and never left the roadside.

Last Thursday, I drove to Rockport with my brother, Jeff.  We did leave the road.  And often hiked through crusted snow to see what was around the next bend in the river.

During the winter, this stretch of the Skagit River attracts hundreds of bald eagles from Canada and Alaska. Why? Easy pickins. Or, as a Seattle Times reporter put it a few years ago:

…to feast on salmon carcasses that wash up on the river’s gravel bars, the equivalent of a Las Vegas buffet for snowbirds: cheap, plentiful and, OK, maybe a little stale.

Jeff primarily shot still pictures, but used the same camera to shoot a bit of video, too.  I shot lots of video.

The first few scenes in this video were actually shot while we were still en route to Rockport. The sun was rising as we were driving on a stretch of Highway 530 between Arlington and Darrington. What words to reach for as I attempt to describe the unveiling of that new day? Magical? Mystical? Let’s just say, spectacular.

After the shoot, I used the GarageBand application on my Mac to create a piece of music for this video.  When I imported it into iTunes (so that I could access it with GarageBand), I felt compelled to give the song a name, Where Spirits Soar.

If you liked this video, you might also enjoy watching Snohomish River rising quickly. 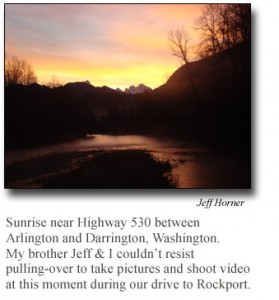