(Snohomish, WA)  One of the best moments I’ve had watching Snow Geese came as a surprise this past December.  I’ve just now edited that video and am sharing it here.

On December 6, I’d nearly finished driving the short length of Springhetti Road.  Sunset was fast approaching and the prospects for a satisfying shoot seemed to darken by the minute.

I did see a large flock of Snow Geese gathered in the distance, just west of Highway 9.  And a smaller flock appeared out toward the middle of a nearby field.

Alas, I turned around near Harvey Field and conceded that it was time to drive home, heading back up Springhetti Road along the way.

And that’s when the magic happened.

About halfway up the road, Snow Geese were now flying directly overhead.  Lots of ’em!

The geese were coming from the west, and appeared to be landing close by (the higher ground of the railroad  that runs beside this stretch of road obstructs the immediate view to the east).

I parked along road as wave after wave of geese continued to pass overhead.

Once I had my camera and tripod out of my vehicle, I walked all of 30 yards and set-up along the railroad tracks.

The view was magnificent:  So many Snow Geese arriving in a farm field on a sun-splashed December afternoon, and the snow-capped peaks of the Cascades in the distance.

It all made for a delightful, exhilarating moment behind the camera. 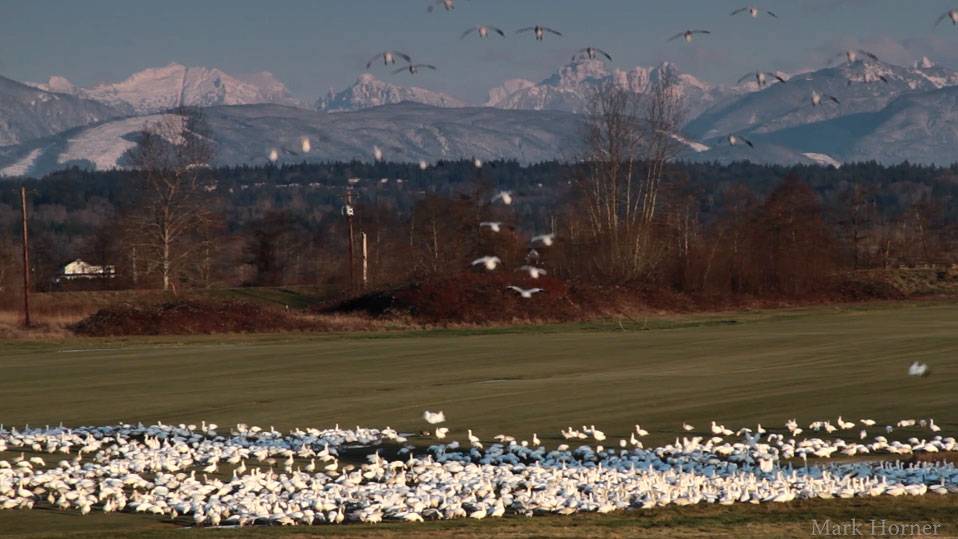