(Snohomish, WA) An early morning photography quest in sub-freezing temperatures revealed a heart-warming surprise on the last day of November.

While looking for snow geese in local farm fields, something else caught my eye while I drove along Lowell-Snohomish River Road.

At first, I noticed a car parked alongside the road. Had the driver simply stopped to look at nearby cattle?

Driving closer, it became apparent the answer was, No.

The cattle weren’t the only animals bedded-down upon the frost-covered grass. Appearing just as comfortable as those much larger, muscular livestock was a very proper-looking deer.

Not wanting to disturb the moment for the roadside motorist, I decided to drive past. I’d go ahead and scout the fields for snow geese a few miles up the road, on the edge of the Everett city limits.

Approaching Rotary Park, I surveyed the fields where, in warmer months, the Snohomish River spills into an irrigation channel that supplies water to much of the valley’s farm soil.

No snow geese were to be found.

The vacant fields caused me to reflect on the moment I’d turned on the car radio prior to sunrise. A hunting program was on Sports Talk 710. A guest on the program was talking about snow goose hunting.

I turned around, then briefly pulled-over to retrieve my Canon 7D from the back of the vehicle. If that deer was still settled down with the cattle, I’d like to take its photo without having to get out of my vehicle.

As I drove back toward downtown Snohomish, I maintained a careful watch for that unfamiliar patch of ground where I’d first seen the co(w)mingling hoofed creatures at leisure.

And there they were. Right where they had been about 15 minutes earlier.

Not wanting to forget this spot, I made note of a business sign: Riverside Topsoils.

It seemed the animals hadn’t budged. And the car I’d seen earlier was now absent.

I pulled over, put my vehicle in park, lowered the window, and turned the car key to restore silence.

Next, I reached over to the passenger seat for my camera.

The staccato sound of the DSLR hardly seemed to surprise the animals.

The deer seemed to study me a bit, the rust-colored cattle seemed oblivious.

Up close, the sheer size of the livestock is impressive. What type of cattle are they? I’m nowhere near well-versed on breeds of cattle.

(A web search the following day has me suspecting that these were Limousin cattle. Perhaps you, dear reader, can help set the record straight on that point in the comments below.)

Wanting to squarely frame the scene with the deer at center, I turned the engine back on and slowly drove forward several feet, then stopped.

No nudge or hint of immediate concern came from the animals.

Having quickly secured a well-composed photo, I put the camera down and briefly studied the animals one last time.

They seemed so content upon that cold ground in the fading moments of morning’s golden hour. Aside from an occasional passing car, the scene felt very much…at rest.

I am thankful for it.

More images from the morning of Saturday, November 30, and moments leading up to finding the cattle and deer. 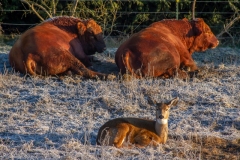 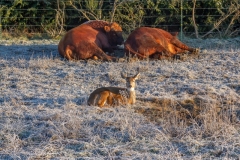 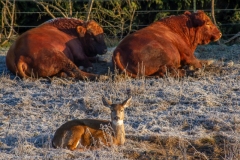 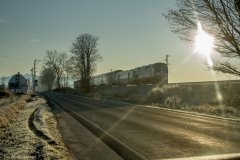 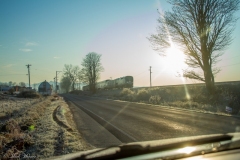 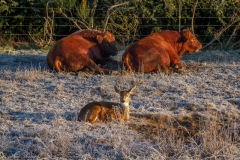 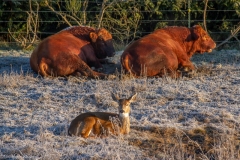 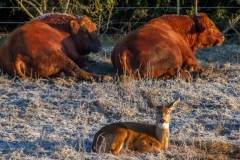 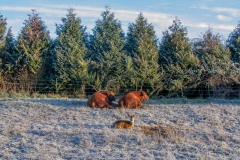 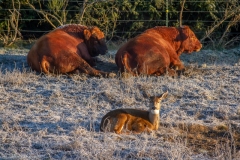 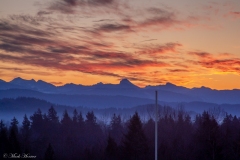 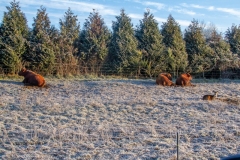 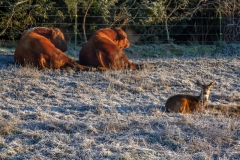 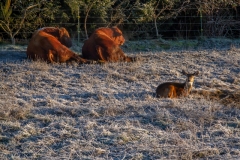 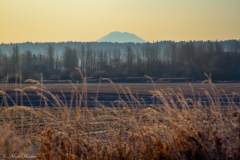 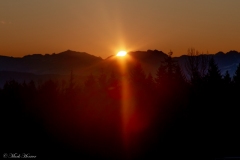 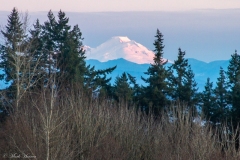 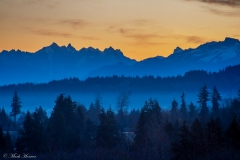 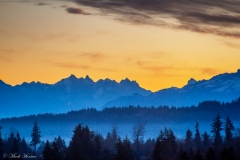 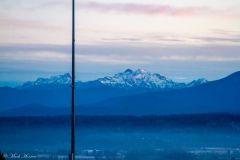 All images are available for purchase.