(Safford, Arizona) The man who drove the unusually long van (it takes up two parking spaces) was not unfamiliar to workers in the photo department at the Wal-Mart store on south 20th Avenue in this rural mining and farming town. The middle-aged man had visited this store several times before.

Two employees now believe he’s the same person who’d telephoned them in the past, asking for permission to use the store’s public-use scanner so that he could burn a CD of nude pictures.

The man returned January 3, 2008 and got busy at that scanner at 7:22 that morning. Wal-Mart photo specialist Esther Barella and the store’s photo department manager, Rachel Rojas, noticed that the customer carefully placed his pictures “upside down” beside the scanner.

The women saw enough to know something was wrong. Picture after picture featured partially or fully nude boys.

The chain of events about to unfold would expose many more images of naked boys; both in pictures and on DVDs . According to the police report, one of the movies would include a child engaged in bestiality.

Wal-Mart co-manager Joe Baldez approached the man at the scanner and started asking questions. Later, Mr. Baldez told police that the man had claimed the boys were his sons in Venezuela. The manager added that the customer had appeared nervous, and had stated, “I don’t have time for this,” before marching out of the store.

The man had left with his original pictures. But he’d forgotten to take that Kodak Picture CD he’d just burned. He never paid for it, either.

That forgotten CD is now referred to as “Item #1” in a police report. Investigators found 28 images on it. Most of the pictures show nude boys or partially nude boys. One child appears to be under the age of 15. Another boy, who appears fully nude in three pictures, appears to be less than 10-years-old.

Six of the pictures on the CD are simply head shots of a bearded, middle-aged man: The very man who’d just left the store.

A good starting point for evidence.

Safford Police Officer Herschel Medlin arrived at the Wal-Mart store at 8:27am. One look at the pics on the CD convinced him that he needed to find the mystery man who’d left the scene only minutes earlier.

Mr. Baldez offered a description of the blue van usually driven by the customer. Ms. Barella and Ms. Rojas explained that the older model vehicle had distinct features, including “gas cans on the back of it” and its unusual length.

Officer Medlin went outside and surveyed the parking lot. Finding no sign of the van, he contacted police in the neighboring town of Thatcher and requested their help in finding the vehicle. Safford police detectives were also called to the scene.

Detective Diane Thomas spoke with Wal-Mart security employees Jacob Wiltbank and Brandt Dobosh and managed to locate surveillance video of the van. It appeared to be an older model (1970’s or ’80’s) vehicle, possibly faded-blue, and about 18-feet long.

Security video also revealed that the man had initially entered the store at 5am. He was white, wore a plaid shirt and a “beret type hat.”

In the surveillance video, the man could be seen putting on a black jacket before leaving the store.

Officer Medlin also learned that the suspect had scribbled a name on a sign-in sheet before using the scanner. The handwriting was difficult to read, but the first name appeared to “Ken” or “Keith.” The last name started with a “Z.” The rest was too difficult to make out.

At 9:06am, the Arizona Department of Public Safety advised Safford Police that one of its officers, Stewart Shupe, had stopped a blue van at milepost 113 on Highway 191. It had been heading south.

Sixteen minutes after the heads-up call from DPS, Officer Medlin arrived at the scene on Highway 191. Safford police Captain Dennis Whisman and Detective Sergeant Jason Knight were also present. Officer Medlin immediately recognized that the van was the same vehicle that had appeared on the Wal-Mart surveillance video.

According to Officer Medlin’s police report, the driver of the van admitted that he’d scanned pictures at Wal-Mart earlier that day. Detective Sergeant Knight asked the driver if he would show the officers the pictures that had been scanned.

The man got out of the van and handed Officer Medlin a “brown zippered folder.” The folder contained the same pictures that Officer Medlin had seen on the Kodak Picture CD. And the driver of the van appeared to be the man pictured on that CD.

Officer Medlin asked the man about the children in the pictures.

In his police report, Medlin states that the man claimed the kids were his children in Venezuela.

“What are their birthdays?” Medlin asked.

“Uh, uh, uh, uh,” is the response noted in the police report.

He asked for the name of the boys’ mother and for their address.

The officer wanted to know how he could contact the mother or the boys.

“I don’t want you to contact them. I would like a lawyer,” is the response recalled in the police report.

The driver of the van was handcuffed, searched and placed into the back of Officer Medlin’s police car.

But who was the mystery man?

A probable cause search revealed more information about the van. The vehicle had a kitchen, including a stove and a refrigerator.

At the back of the van, police found a bedroom, TV, DVD player and a RadioShack 50-channel scanner.

The officers noticed that when they spoke on their radios, they could hear themselves on the scanner in Forbrick’s van. It had been programmed to their frequency. And the scanner had been wired into all of the speakers throughout the van.

Inside a wooden box “that contains a peyote cactus sticker,” Officer Medlin also found “a smoking device commonly used to smoke illegal drugs.” Next to “the pipe,” Medlin located a pill bottle 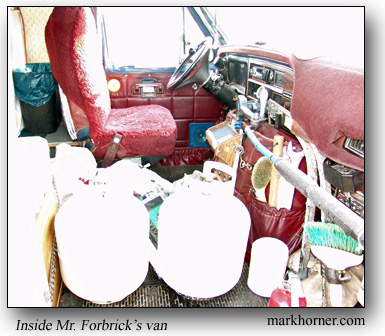 with a plastic bag inside. The bag, he wrote in his report, contained “an unknown green plant substance.” Something he also found in a brown glass jar.

While waiting for a truck to arrive to take the van to a local tow yard, Detective Wren noticed the van was registered to a “Steven G. Forbrick.” Detective Wren later spoke with Forbrick at the jail and asked about the slight discrepancy in the name. The suspect explained that his name had originally been Steven G. Forbrick, but that he’d legally changed it to Stevo Byrom Emmanuel Forbrick. The vehicle was still registered under his former name, Forbrick explained (note: elsewhere in the police report–away from the narrative–the suspect is also listed as Steven E. Forbrick).

Inside the Safford Police Department, Detective Wren and Officer Medlin sorted through the evidence. The items found in Forbrick’s van included information about a storage unit.

At 11:40am the following day, police executed a search warrant on storage unit #175 at More Self Storage in Safford. 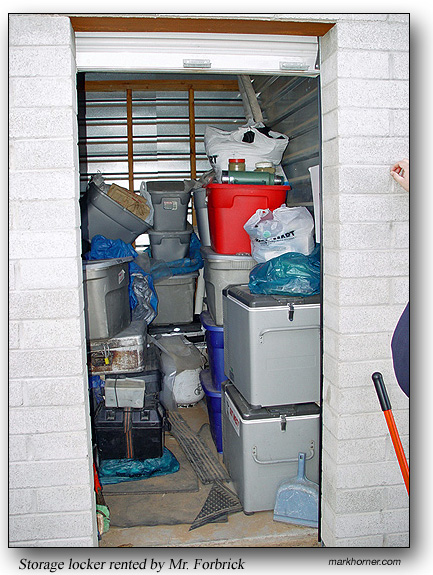 Investigators had confirmed that the unit was currently rented to Forbrick.

Most of the DVDs contained video of naked boys swimming in pools, hiking, camping, kissing, showering and performing gymnastics. The movie titles included “The Gang of Wet Rascals,” “Makin’ Mischief” and “Rascals in the Woods.”

According to the police report, a 94-minute DVD featured nude boys less than 10-years-old “talking about how they are in love with each other…” The police report also states that this same DVD shows “a nude boy having intercourse with a live goose in the presence of several other nude underage boys…”

The picture CD found in the storage unit was labeled “JZK babys and peyote way.” It contained pictures of a nude boy who appeared to be less than 10-years-old.

Investigators stated that much of the evidence in this case is “sexually suggestive.”

Other items found in the storage unit included books and magazines. A magazine titled “Gender Bender” contained pictures of transvestites and men engaged in sex acts.

Forbrick’s van is a 2-tone blue 1983 Ford with Arizona license plate WA00840. The police report states he resides at the 7800 block of Siesta Del Retiro in Graham County. However, the Eastern Arizona Courier in Safford reports that Forbrick lived in his van.

Forbrick is charged with sexual exploitation of a child and is currently held on a $15,000 cash bond.

Anyone with additional information about this case can call the Safford Police Department at ( 928 ) 428-6884.