(Snohomish County) I’m no geologist.  Certainly not an engineer, either.

But a simple eyeball test nearly screams that it’s only a matter of time before a significant chunk of hillside crashes down upon Lowell-Larimer Road.

Worse yet, a slide could extend toward houses just across the road.

That possibility is certainly on one man’s mind today.

He told me his house “shook, rumbled” when trees came crashing down the hillside and onto the road and power lines just yards from from his home this morning.

That man declined to speak on camera, but his concern is real.  I watched him move his boat closer to his house, away from the hillside.

He told me he was doing so in case the hill came down.

A worker at the site this morning made a point of telling me I was assuming some risk by simply standing across the road from the hill. 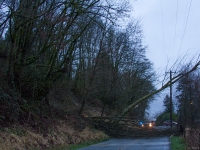 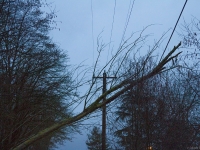 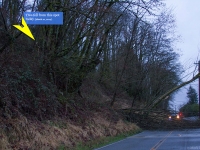 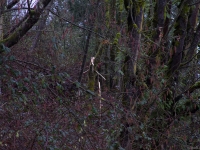 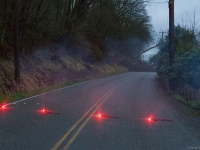 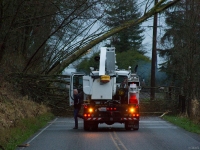 The worker told me the hillside was unstable, and paused to point to the exact location where the large tree now on the road had snapped from its trunk a considerable distance up the hill (you can see that trunk in the photos and video from today’s shoot).

The worker advised me that I should leave soon.

But thoughts of that hillside stay with me.

That stretch of Lowell-Larimer road is not unfamiliar to me.

One year ago to the month I also stood there with my camera.

I’ve since come to understand the code in the hill.

Just look for the scattered, practically horizontal tree stumps; the signatures of past, similar episodes.

The trees are falling.

The roots holding the hill will loosen.

And that nature will continue to surrender its grip on the hill that rises above the valley floor here.

The code of the hill speaks to me in another way, too.

My childhood flirted with this place.

I spent several years in my youth growing-up in an area not far from the top of that hillside; a neighborhood called Eastmont.

Back in the late 1970’s, it was a thrill to explore the woods beyond the back of Eastmont.

With each step, my brothers and I would be closer to the valley.

But we never saw it.

Back then, those woods seemed more like a dense jungle to an adventurous boy.

Fact is, that area was still thick, mostly untamed forest.

I remember lots of wild berries, and discovering a place we called the “clay pits.”

Where much of those woods once stood, homes now stand.

And about 35-years later, I find myself thinking of clay, once again.

In the final shot of today’s video, you’ll see what I recorded while standing in the boat owner’s driveway.

The camera first shows the simple road, then tilts-up to reveal what looms overhead: A towering bare wall of rain-soaked clay.

One can only hope  local leaders have their eyes on the slippery slope that is this stretch of Lowell-Larimer Road.

And that they take action before a potential disaster comes crashing down.

*This post updated at 10:35pm, March 10, to include links to The Herald stories. Thank you @longhare1 for bringing these helpful background stories to my attention.